I think that train travel in South East Asia is great for one reason only: it provides a smooth ride.  Buses and cars out there don’t have the best suspension and the roads are scattered with pot holes, so the best way to travel is by train, especially if you want to catch up on some sleep.  After our disastrous attempt at catching a train up to Kota Bahru in Malaysia, we were now more determined than ever to have our train journey!  Dave had gone on to Vietnam and we had left the beautiful Perhentian islands.  We planned to catch a train from the border straight up to Bangkok.  I was a bit apprehensive about heading back to Bangkok, because the first time I went backpacking in 2010 this is where we began and the culture shock was huge.  We arrived on the day of the Thai Queen’s birthday so the city was even busier than normal and all I can vaguely recall from that first evening is walking down Ko San Road in a daze with people from all angles shouting ‘Tuk tuk!’ at me.  Nevertheless I decided to give the city a second chance, maybe we just got off on the wrong foot.

We treated ourselves to a hotel in Kota Bahru and ate dinner at a local night market.  In the morning our omen appeared in the form of poor old Mick being a tad unwell.  It’s always funny to begin with when someone gets the travel bug (pardon the pun), but amusement soon turns into pity!  We still got to the bus station on time and found the correct stop.  Naturally, the bus for our stop parked up at the opposite end of the station.  A local Muslim lady who saw us looking a bit confused very thoughtfully asked us where we were going to and pointed out our bus, we thanked her and did the ‘I’m going to miss my bus’ jog over to the coach.

The journey was hot but short and we arrived at border control about an hour later.  We were really excited and smug – we were finally going to be getting a train and could tease Dave for missing out when we next saw him.  Went through the border and basked in the excitement of being in a new place and entering the next stage of our adventure.  The tourist information office was close by and we bounded in to happily ask where the train station was, our answer from the lady at the desk was this:

Kay and I laughed, and so did the lady behind the desk!  Mick didn’t, can’t really blame him.  We learned that our best option was to get a bus to Bangkok, it was an overnight journey and would take about fifteen hours but it was a good price.  We all agreed and headed outside to get a taxi.  The only taxi service available was moto-taxis.  I avoided hiring a moped the first time I was in Thailand because I thought it was very dangerous, but this guy clearly rode these things every day so I thought sod it, let’s go.  It was good fun actually, I can see how riding a moped could actually be safer than driving a car because you have so much more control and ability to weave around obstacles. 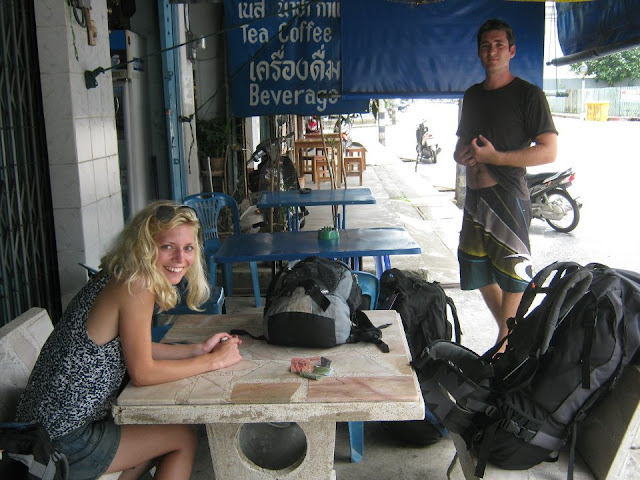 The drivers kindly dropped us off at a cash point and then took us right to the bus station.  We got our tickets, bought some snacks and waited.  Once on the bus we were provided with some great entertainment, there was a Thai soap opera in which three friends were constantly in trouble with their wives for getting into compromising situations with other women.  Plenty of slapstick thrown in as well for good measure.  After this we watched a variety of Thai music videos in which the main theme seemed to be passionate and all-consuming love.  One music video ended with a heart-broken and now crippled girl rolling herself and her wheelchair off the top of a building!

The televisions were then switched off and I busied myself with taking photos of overloaded mopeds and vans in transit – it’s one of the many things I love about this part of the world: 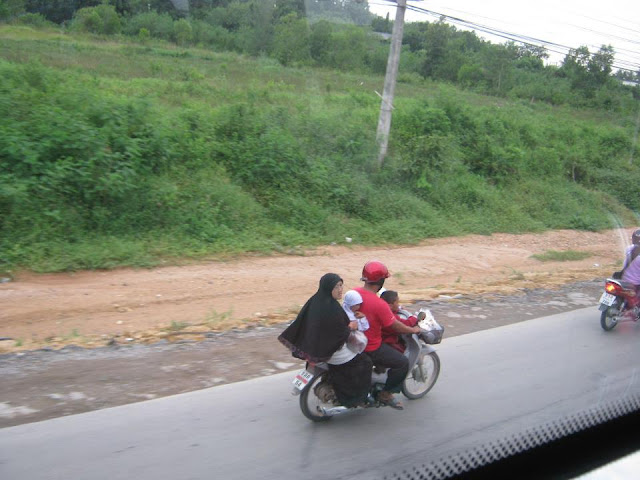 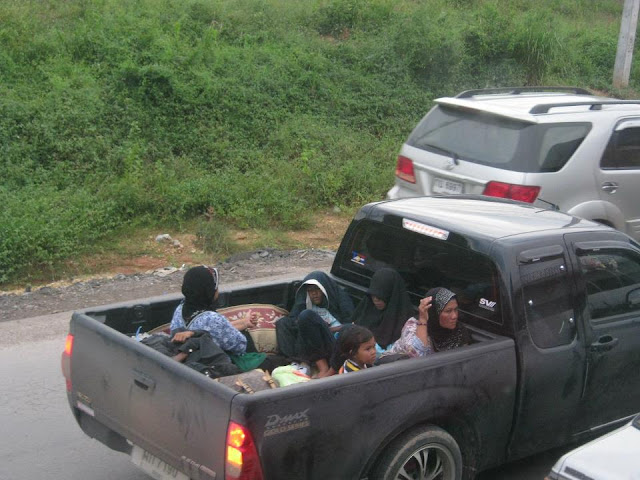 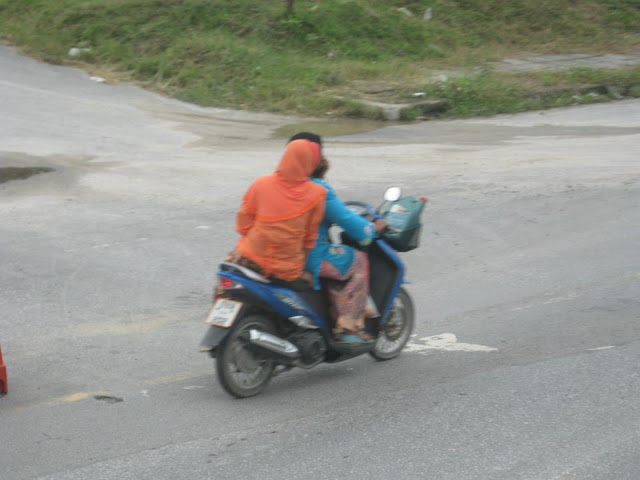 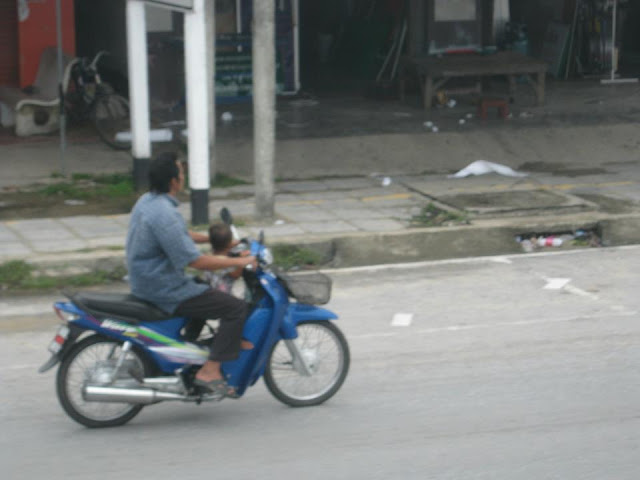 Eventually we fell asleep (Mick opted for the floor, he still wasn’t feeling great) and arrived in Bangkok in the early hours of the morning.  We were staying at a hostel called Suk 11 which had been recommended to me by my mum’s cousin.  It is located in the Sukhumvit area of the city, the opposite end to Ko San Road.  It is one of THE nicest places I’ve ever had the pleasure of staying in.  The decor is beautiful and interesting, it is family run and very family friendly so it almost feels like a retreat.  The rooms are immaculate and come with brilliant air con, there is a TV room, internet and all of the shared bathrooms are sparkling with cleanliness.  There is even a restaurant next door which serves amazing meals and has very friendly staff.  We checked in and had breakfast which was being served just as we arrived.  Best breakfast ever!  Brown and white bread, coffee and tea, fruit juice, jam and peanut butter, and a spread of freshly chopped mango, watermelon, pineapple and more.  In addition each morning they would also offer some small breakfast snacks.  These normally came in a little shot glass and consisted of yoghurt, salt or sugar and some kind of local fruit.  They were quite delicious!

After the obligatory backpacker nap we explored the local area and agreed to head to the weekend market the following day.  That night we decided to go out for a casual drink at a bar, there seemed to be a lot of watering holes around so we were sure we’d find somewhere nice.  Hmm.  Well, what we hadn’t realised was that we were right in the middle of the sex district.  Every single bar was full of Thai ladies and ladyboys and big balding white men.  We settled on playing ‘spot the sex tourist’ and after walking past what seemed like the millionth go-go bar we decided to call it a night.

We spent the next two days SHOPPING!  I’ve been to Chatuchak Market three times now and I would happily go back.  So many beautiful things and so much unsuccessful haggling on my part!  I still got some super bargains.  After a few days of shopping, eating, drinking and sex tourist spotting we had to leave.  Mick was heading up to the north of Thailand and we were heading to Cambodia.  The three of us would meet up in Laos in a couple of weeks.  I’m happy to say that I absolutely loved Bangkok the second time around, and was actually really sad to leave.

We said goodbye to Mick and headed to the train station where we would be getting a mini-van to the Cambodian border.  Mick planned to get a train to the north and as far as we were aware he had been successful, the lucky git.  As you will now have guessed, no journey for Kayleigh and I would ever be simple, we’d come to accept this now.  But we were running out of ideas as to what else could possibly go wrong for us!  Funnily enough, this post is set before the landslide we encountered in Laos.  Seated in a mini-van with a German couple and a Czech family we set off.  I really admire families that do backpacking trips together, I think it must be a great experience for the kids but also a lot of hard work for the parents!  The three children belonging to the Czech family looked to be between five and twelve years, yet the Thai driver still thought it would be appropriate to put on a vicious film about vampires which was rated 15.  Poor kids!  Napping was difficult due to the lack of suspension (when oh when would we get our train ride?!) but we managed to get a little bit of sleep.

Once at the border we had lunch, filled out all the necessary forms and crossed over into Cambodia.  The difference of the place struck me immediately.  I thought Thailand was poor, but I had never seen anything like this.  We waited for the rest of group to arrive and stared at this new place.  I just couldn’t believe how poor it looked, I had known that Cambodia was a developing country before I decided to go there but actually being there was something else.

We were grouped together with some more travellers and herded on to a bus that smelt rather strongly of body odour, nice.  But we knew we would be arriving in Siem Reap very soon so we kept smiling and went on our way.  At a roadside cafe where we had a break, Kayleigh and I had our first experience of the children that sell in the streets.  We’d heard so much about them already and they did everything we thought they would.  ‘Hello, hello, today you buy!’ was shouted at us by little girls and boys holding up small trinkets and wristbands.  They laughed and joked so easily with us, it was clear how accustomed they were to this.  They were full of cuteness and smiles and waved us off as we left.  I wasn’t really sure how I felt about them but it definitely made me uncomfortable.  I feel it’s so difficult to know whether they are there by choice or not so I always avoid buying from them just in case.

By the time we got to Siem Reap it was dark and the coach company had pulled a little trick out from under their sleeve.  Rather than dropping us at the bus station as planned, they dropped us at a tuk tuk rank so that we would have to buy a tuk tuk into town.  To be honest, travel is so cheap in South East Asia that I kind of think fair enough.  But Kay and I had one big problem: we had no money.  As we were quite tired now we both began to panic a little and became short with the drivers trying to ask us to get into their tuk tuk.  We were trying to contact the hostel we had booked with by phone but discovered that our phones were not working.  We had been able to laugh when things went wrong up until now: it was dark, we were penniless, we didn’t know where we were and we really didn’t know what to do.  All of the sudden, a tuk tuk driver who called himself John quietly interrupted us and asked us what was wrong.  We gave up trying to ignore them and told him that we had no money and didn’t know how we would get to our hostel.  John said that if we agreed to let him take us to Angkor Watt and the other temples in the morning at a price of twelve dollars for the day for both of us, he would take us to our hostel free of charge.  Surprised by such kindness and how cheap the price for the temple tour was, we immediately said yes and breathed a huge sigh of relief.  These simple acts of kindness were something I encountered a lot in Cambodia and later in Laos, the people in these two countries are quite incredible.

We checked in at Rosy Guesthouse (a fabulous place that I will write about in my next post) and checked our emails.  Mick had sent us both a message, as we read it we both began to laugh hysterically.  He had arrived at the train station to be told his train was cancelled due to flooding, and he ended up having to get a coach.  Brilliant.

6 Replies to “Bangkok to Siem Reap”