During my globe-trotting escapades last summer with my partner in crime Kayleigh, we encountered a wide variety of challenges.  I’ve already covered our monstrous journey from Taman Negara to the Perhentians, but there’s plenty more to tell!  After a few days in paradise and a difficult journey up to Bangkok (I’ll tell you about that another time …) we planned to travel through Cambodia and Laos, finishing in Luang Prabang where we would meet back up with Mick.  Dave was by this point travelling in Vietnam and we had hoped to all meet up in Thailand but realised we would be cutting our visa time allowance too fine just before we flew home, so it was going to be the three of us in Laos instead.

Of course there were a number of mishaps during our Cambodia travels, but again I’m going to have to give each event its own blog space – too much disaster for just one post!  After a short stop over in Vientianne (the most laid back capital city I have ever been to) we were on another luxury double decker bus for a six hour ride to Luang Prabang.  Everything was organised, Mick knew what hostel we were staying in and roughly what time we would arrive, all good to go.  But the numbing inevitability of big time-delaying obstacles was first made apparent by Kayleigh’s broken seat on the bus.  At first we laughed but I now think it was an omen, a sign of things to come.

We entertained ourselves with Kayleigh’s ipod and looked at the incredible landscape we were being driven through – we were cruising along extremely high and windy roads through lush green mountains, it was so beautiful but I should mention that you couldn’t see very far ahead at all because of all the sharp corners and tall, dense hills.  We had a short mid-morning break at a roadside cafe (noodle soup, fragrant and delicious) and were then herded back on to the coach by the driver beeping his horn in an absent minded manner.  By this point we’d been travelling for about four or five hours, so I assumed we must nearly be there.  I also noted how surprisingly smooth the journey was going, thought too soon didn’t I?

Half an hour or so later I noticed a couple of broken down lorries up ahead.  Then a broken down coach with a load of backpackers sat on the road looking like they’d been there for hours.  Very odd indeed that these vehicles had all broken down in the same spot.  We turned a corner and suddenly saw the road lined on both sides with stationary cars, lorries, vans, taxis, buses, coaches and many other vehicles.  Something was quite clearly not right.  We seemed to be driving past all of these, so for a short time we were optimistic that we weren’t going to be held up by whatever was happening.  Wrong!  Our driver quickly pulled into a lay by and came upstairs to tell us all to grab our bags, start walking and meet ‘the bus on the other side’ … other side of what?  We assumed he meant the other side of all this traffic.  He gave us all a little ticket with a bus number written on it, we got our stuff together and began walking.  Sods law had kindly made this event occur in the middle of the day, that is, the hottest part of the day.  We stumbled along the road feeling the sweat start it’s south bound journey from our foreheads and marvelled at the ridiculous amount of non-moving vehicles lining the long and winding road.  We walked for about a mile still clueless about what was happening, but very keen to get out of the intense heat.  Kayleigh and I had now accepted that we were going to be late and Mick would probably miss us; we’d have to try and locate him tomorrow instead.

Then it hit us.  We turned a corner and saw this: 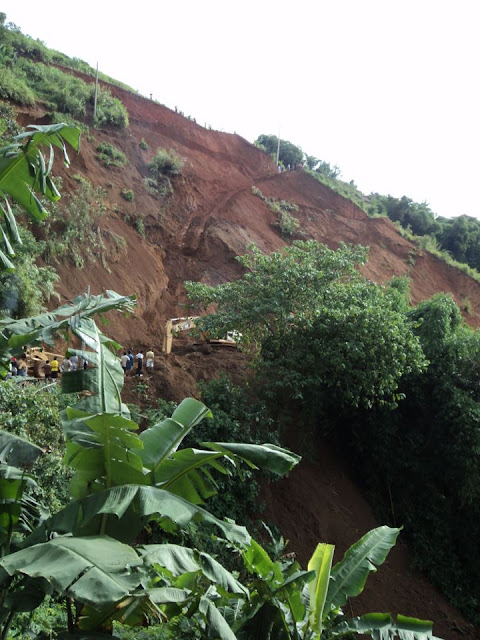 The road came to an abrupt end, the reason the vehicles had been held up was because of a landslide.  You see where the yellow digger is?  Well a few metres below that, just below the trees, that’s where the road is hiding.  The digger is trying to dig down to the road surface, very dangerous as removing the dirt only encourages more to fall down.  We learned from a few other backpackers hanging around that it had happened a couple of days earlier (so the bus company we booked through had known all about it, hence the coach relay they had organised for us) and that a whole village had virtually been wiped away.  Tragically, four people had died.

We had one choice and one choice only: climb over the landslide.  In the unbearable heat.  Whilst carrying our (now very heavy, the shopping in Bangkok is great) backpacks.  With nothing but our steely muscles (did I say steely?  I meant non-existent) to drag us up and over.  Without stopping to ponder our predicament (because that would have only made us more nervous) we got our trainers on and took a big gulp of water.  Then we began the ascent.

I looked at nothing but my feet and tried not to think about how ungraceful I probably looked, and more importantly how high up I was, oh, and how unstable the dirt felt beneath my feet.  It took us about twenty minutes to get to what we thought was the top.  Covered in mud, dust and sweat we triumphantly posed for a photo taken by a couple of Korean girls from our coach (who were immaculate I might add).  We then turned another one of those wily corners and realised we were only half way up, words cannot describe the sinking feeling of disappointment we both experienced.  On the way up we were passed by many locals carrying backpacks for other westerners, they were half our size and were going at twice the speed – pretty amazing if you ask me. 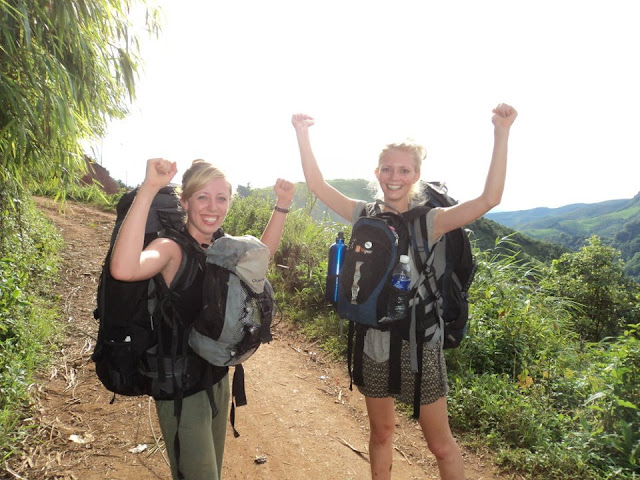 The descent on the other side proved to be more difficult because the ground would just slip away as soon as I set foot on it.  But we could see the road again and quickly slid down the landslide, how ironic.  Alarmingly there were local children playing happily on the landslide, apparently unaware of how dangerous it was. 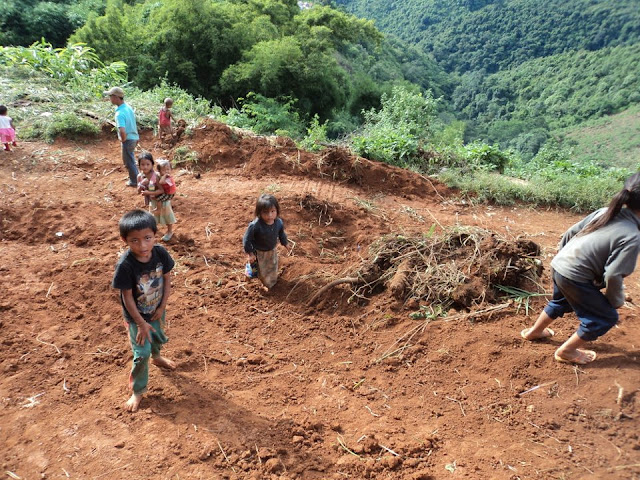 Whereas we often have extreme health and safety regulations back in blighty, there seems to be no health and safety at all in many other parts of the world.  On the one hand, I love and admire this because I almost see it as an acceptance of external forces, an attitude that whatever will be will be and there is nothing to be done about it.  But on the other hand, I think standing on a fresh landslide is one risk I would rather not take.  I climbed over it as quickly as I could and I didn’t hang around to take in the view – although the little snippets I did see from the corner of my floor focused eyes were pretty amazing.

Finally, we reached the road again and were met with cheers and chuckles from locals watching the western backpackers navigate the landslide with ‘sterling expertise’.  We walked down the road past yet more held up vehicles coming the other way and started looking for our coach.  Obviously, our coach was right at the back of all the traffic, so after another long walk we were loaded up and set off again for Luang Prabang. 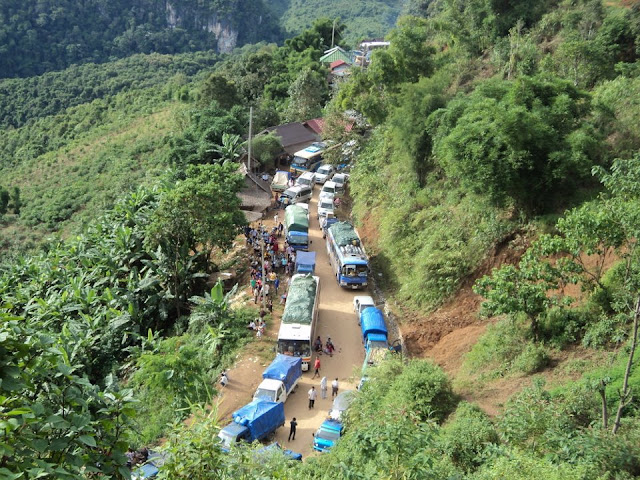 A combination of probable sunstroke, tiredness and adrenaline meant we were wide awake for the rest of the journey telling each other repeatedly how unbelievable it was that we had just climbed over a landslide.  Our coach pulled in to the bus station, we hopped into a tuk tuk and we finally arrived at our hostel about four hours later than planned.  Just after we checked in, we turned to see Mick walking through the gate.  He was passing on the off chance we had arrived, what a nice stroke of luck!  We had dinner at the amazing night market in Luang Prabang (if you ever get the slightest chance to go, take it) and slept very deeply.

All the pictures used in this post were taken by Kayleigh who cleverly got her camera ready before we began the climb, she got some pretty good shots!

3 thoughts on “Landslides and how to overcome them, literally.”