One of the best (or worst, you decide) things about backpacking is the fact that you are completely and utterly dependent on circumstances way out of your control.  You have to accept this and go with the flow because, well, what else are you going to do?

Take, for example, the time I journeyed from Taman Negara to the Perhentians in Malaysia, during which time I learnt where not to stay in a town called Jerantut.  A brilliant hostel manager in Taman Negara had given us what felt like inside information on the cheapest way to reach the Perhentian islands.  How lovely for this man to help us rather than trying to convince us to go the whole way in his brother’s taxi!  Rather than booking a mini bus like most folk, we were told to get a local bus to Jerantut.  The bus left at 7.00pm every day from a bus stop down the road.  After giving us very intricate directions to the bus stop (it was actually just a street corner, had he not been so specific we would have certainly missed it), he explained that we could get a night train from Jerantut.  The bus would arrive at about 10.00pm, and the train would leave at 2.00am, arriving at Kota Bahru in the early hours of the morning just in time for the first boat to Pulau Perhentian Kecil.  We thought it was an excellent plan – we could get a late dinner in Jerantut, book our tickets when the station opened at midnight, buy some beer and some playing cards and slowly drift off to sleep on the night train.  Perfect.

Full of excitement and eagerness we played a spot of frisbee while we waited for the bus to arrive, and when it did arrive we realised that it was not a bus.  It was a ten seater van, already with about eleven people in it. Of course the driver managed to fit us all in and off we went (at 6.40pm, anyone ‘cutting it fine’ would have missed it, although to be honest I’m not sure the driver could have physically fitted anymore humans and backpacks in the vehicle).  It was an uncomfortable journey to say the least, especially with the lack of air con, but we took in the beautiful sunset and chatted excitedly about the journey we had ahead.

Upon arrival at Jerantut, we found a local night market and got stuck into some serious satays and sticky rice with peanut sauce.  I distinctly remember taking a photo of the group looking tired but happy, when I look at that photo now I think ‘If only we knew …’.  After dinner we found a bar and had a couple of beers – there was still about an hour and a half to go anyway!  We then confidently marched up to the train station just before midnight, all smiles.  Mick and Kayleigh went up to the counter to book our tickets, Dave and I played chest bumps with our backpacks and then I turned to see Mick’s facial expression had turned from a bright smile into a very concerned frown.  It turned out that the magical night train had been cancelled earlier that day due to landslides on the tracks.  I was the only one who laughed. 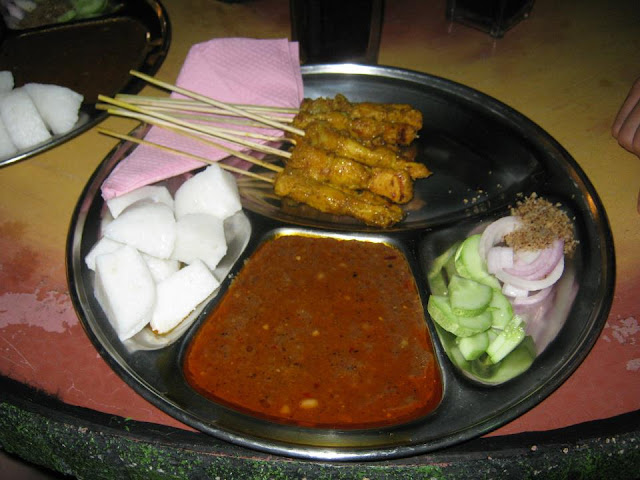 We had two options, we could either get the train the next day at 2.00pm, or we could get a bus at 6.00am to the neighbouring town, and then another bus directly to Kota Bahru.  Both options left us with a slight problem – where did we sleep?

We opted to get up at 6.00am and head to the bus station, we then had to decide what to do until then.  I toyed with the idea of staying up, then Mick and Dave suggested we just take turns to sleep on the platform. You weren’t allowed to, but there were no security guards anywhere, plus it was nice and cool, and it would also be free.  Sadly there was a fifth addition to our group at the time and she definitely did not want to spend the night on the platform.  After much resistance we agreed to head into the town centre and at least see if anywhere was still open.  We found one place that was, it was called Chett Fatt Hotel.  It looked promising initially – the room was reasonably priced, the guy at the reception desk told us where the bus station was, and I even saw a sign saying ‘free water’, great!  He showed us to our room and we immediately realised we had made a huge mistake in adhering to the fifth person’s wishes.  The en suite had no toilet, so naturally previous guests had just gone in the shower, giving the room a distinct aroma of urine.  In addition to this the air con and the fan were broken, and the room without these two aids was hotter than any hotel or hostel room I have ever been in.  So instead of having a night of rough sleep for free, we paid for a night of absolutely no sleep whatsoever.

In the morning as I went to brush my teeth I saw the free water on offer, oddly enough the table on which the bottles were placed was still full.  I think the reason no one had taken any might have had something to do with the fact that the water in the bottles was yellow.  Once ready we left the hotel and the boys went off to find out which bus we needed and what time it left.  We guarded the bags and took in how unbelievably tired we felt.  Ten minutes later we were on another bus which was empty to begin with, but slowly it filled up with school children.  Just school children …  we were on a school bus.  Mick and Dave hit it off with the kids asking them about music, one child in particular stood out as his favourite artists were the Black Eyed Peas and Muse!  About one hour later we had breakfast at KFC (sometimes you need something western) and booked tickets on to our final bus journey.  We were told it would take six to seven hours, that sounded reasonable.  Of course it actually took us well over nine hours.

The journey was mostly uneventful except for the driver’s driving style being truly terrifying and one of the boys eating a dangerous fish curry at a road side restaurant.  Needless to say he became unwell a few hours later.  I won’t name names, but we’ve all been there when backpacking anyway.

When we eventually reached Kota Bahru we checked into a proper hotel, showered and slept extremely well.  We had a taxi booked to the jetty at 8.00am the following day.  Mick, who didn’t want to pay for a hotel, was staying in a hostel nearby and had agreed to meet us there.  We piled into the taxi and all began to doze off slightly as we were driven to the jetty.  Along one particular stretch of road I looked ahead and could see a car at a junction waiting for a clear gap.  As I watched idly the car began to edge out tentatively onto the main road.  ‘He must have seen us, we’re doing over fifty, possibly sixty’, I thought as the car alarmingly continued to creep forward with us charging towards it.  I was suddenly acutely aware that there were no seat belts in the back of the car, and that I was sitting in the middle seat.  The taxi driver had spotted the car ahead and was beginning to veer right to go around it.  ‘Ah good, we’re veering out of the way and the car at the junction has stopped.’

When we were dangerously close to said car, the driver suddenly lurched forward, our driver swerved violently to the right, instead of stopping the other car lurched forward yet again and didn’t stop.  The taxi driver slammed on the brakes, Dave positioned one arm across both seats and the other firmly on the dash board, I grabbed the seats in front of me and pushed myself back as hard as I could, the other two girls woke up literally just in time to brace themselves and we smashed straight into the side of the other car, which was slung across to the opposite side of the road and landed in a ditch.  The driver turned out to be an elderly expat from London and amazingly had nothing but a scratch on his forehead.  Kayleigh whipped out her first aid kit and cleaned him up, and we were quickly ushered into another taxi by a local.  I looked back and saw that the entire local village had turned up to help out.  None of us were hurt – except for Kayleigh who acquired a bruised thumb for a few days.  Shaken, but now more determined than ever to get to the Perhentians, we got our boats tickets and waited impatiently to be called.  We hadn’t seen Mick anywhere and agreed we would find him on the island.

A bumpy boat ride later we stopped and took in the view.  I have never seen water so blue and crystal clear.  Finally after a journey that quite possibly could not have gone more wrong, we had arrived at our destination and it already felt worth it.

We found a four bed hut with a staggering view and hoped to see Mick – the fifth member of our group decided to stay elsewhere, so we had a spare bed ready and waiting.  We had breakfast and looked over the long white beach, and just when we began to worry we might not see Mick again he appeared at our table like an shining Australian beacon of joy.

‘Sorry I’m late guys, I missed the boat.  I got held up on my way to the jetty by some car crash – you should have seen the glass!  I think I got there seconds after it had happened!’

Thankfully, I can now look back on this journey and laugh cheerfully!  It definitely makes for entertaining memories and also made this view that bit more spectacular. 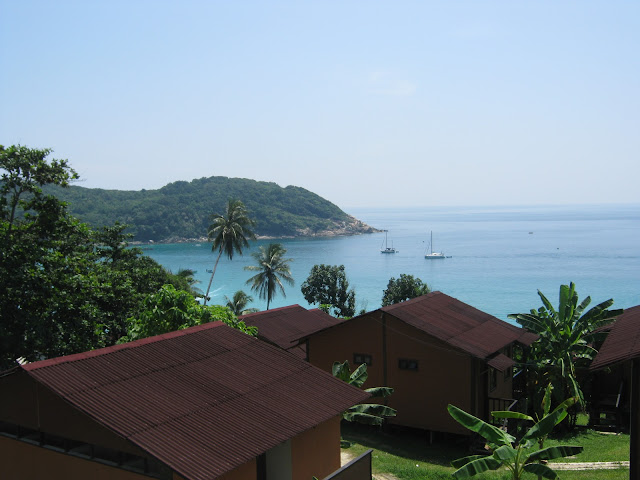