Our day spent visiting the silk villages was one I will never forget.  With every single home we passed in our tuk tuk, the children would come running out to the road with bright smiles, waving madly and shouting ‘Hello!’.  There was absolutely no begging or street selling here too, it was so different to Siem Reap and Phnom Penh – and that’s saying something because despite the begging I completely and utterly adored these two cities.

We slept deeply as we were so exhausted from a hugely enjoyable day, and in the morning it was backpacker business as usual.  Onto another coach, and after a nice short journey we arrived at a town called Kratie.  Into the swing of staying in hotels by now, we booked into another.  No balcony this time but at least we still had a TV and en suite!  We met two British girls staying in the same hotel and agreed to book a tuk tuk together later that afternoon and see the Irrawaddy dolphins.
We then decided to get some lunch.  Kratie was even smaller than Kampong Cham, this generally means it’s either local food or no food.  We found a restaurant run by an American expat and an Aussie expat, after five minutes of listening to them natter it was clear they were both completely mad.  I opted for fried chicken and rice and listened quietly to the bizarre conversations the expats were having.  I then realised the two British girls were sat in the restaurant too, looking a little more than disappointed with their sandwiches.  Generally, when you’re this far from tourist hotpots, it’s always best to go for local dishes as any western dishes just won’t be very nice – and why should they be?  You’re in the east, not the west!
The American guy had picked up on their up turned noses and wasn’t going to let their rudeness slide.  He made a heavily sarcastic comment, I can’t remember what it was but my gosh was it obvious!  Then to add the ultimate gem of comedy value to the situation, his pet cat trotted into the middle of the restaurant with a big (and still alive) rat hanging from it’s mouth!  Of course in England this just wouldn’t happen, and if it did the owner would get rid of the cat and the rat immediately.  But we were in Cambodia.  Mr America’s silver beard curled into a huge cheeky grin and he praised the cat loudly saying ‘Ohhhhh who’s a goooood girrrrrrl?’ in his clear drawl.  I couldn’t help but laugh.  The two unimpressed British diners stormed out in a self-important show of disgust, stopping briefly to say they’d see us later, and Kayleigh and I carried on happily with our food.
After lunch we headed straight to the tuk tuk pick up point and headed off.  As we chatted we learnt the girls were both a similar age to ourselves, were teachers in London, and were on a two week holiday together.  We did also learn their names, but as I had given up writing in my journal by this point, I can’t remember what they were.  We started talking, as you do, about other places we’d been to and what we liked about travelling.  One girl in particular, I’ll call her Jill, began a tirade of things she didn’t like about Cambodia!  Things such as in night clubs the locals don’t ask you to get up and dance… Ummm… Jill explained that she was comparing this to two weeks she had once spent in Rio, where the locals will always ask you to get up and dance.  I don’t know about you, but I think that’s a rather strange and unfair comparison to make.  In addition I know for a fact that some of the locals do like to dance with backpackers in night clubs – our drunken night in Siem Reap is proof of this! 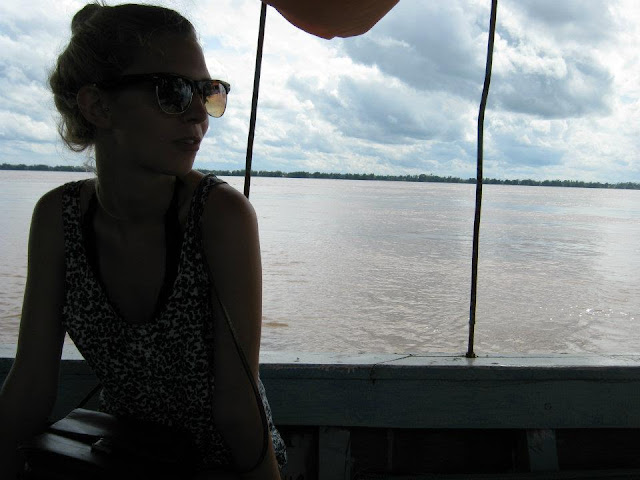 Off to see the dolphins with Kay.
Eventually we arrived by the river and hopped into a boat.  The Mekong is HUGE.  It’s the vastest river I’ve ever seen, I felt excited to be floating along it.  Our boat driver took us up the river for a good few minutes, until he finally stopped the motor and pointed to his right.  I was expecting to either see no dolphins, or at best get a glimpse of just one.  But there they were!  Admittedly they were very, very far away, but I could definitely see them and there were approximately four to six of them popping up every few minutes for a breath of fresh air.  Dolphin spotting over, we tipped the boat driver and headed back to the hotel. 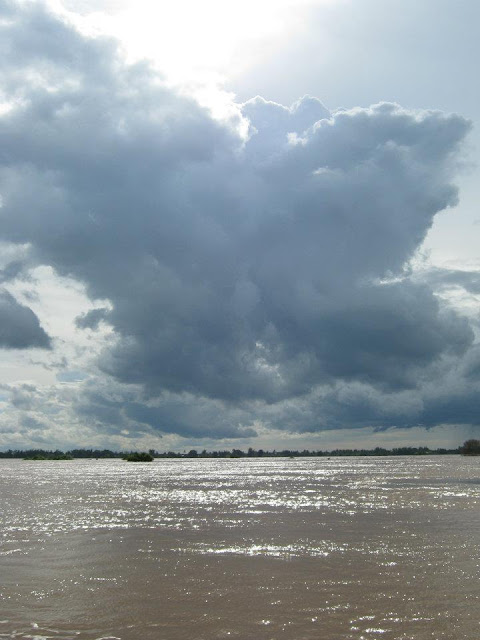 The mighty Mekong river.
The following day we hired a pair of very rickety, brakeless bikes (but they did have nice baskets at the front!), took a boat to one of the local islands, and set off riding around the perimeter.  It was a lovely day, the sun shone, the locals were lovely as always and the views were beautiful.  We stopped for an iced coffee and some peanuts at an incredible hostel which had the biggest, loveliest resident dog.  Yes we did accidentally step in cow pat more than once during the course of the day, but what’s a bit of cow pat in the grand scheme of things? 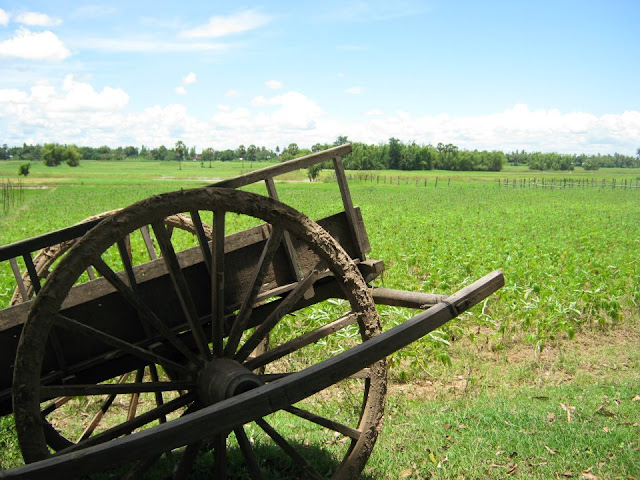 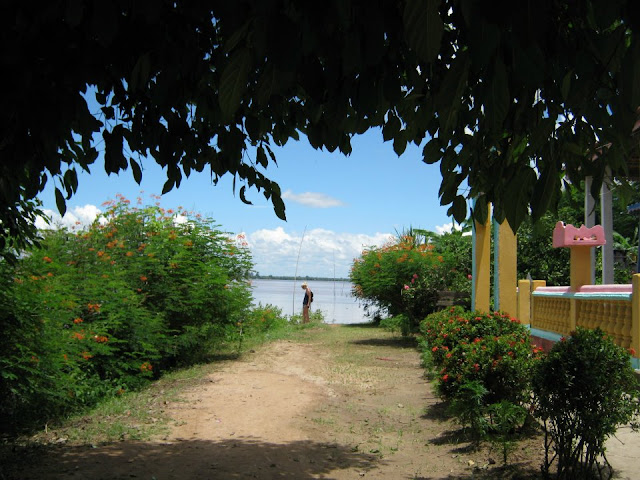 Taking a break from our bike ride. 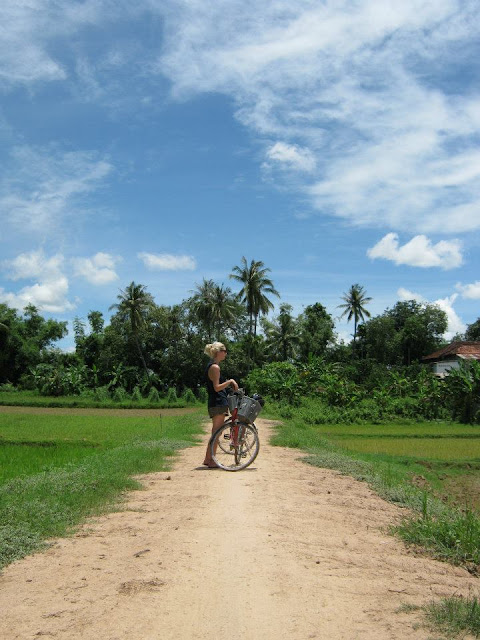 Kayleigh and I discovered in the afternoon that we had a problem.  We both needed to shave our legs, having given them a few days break from the razor they were now getting a bit unruly.  But upon opening our wash bags Kay found that her razor had gone rusty and mine had disappeared entirely.  Enter razor panic buying mode.  Apparently Cambodian women don’t shave their legs, as every single toiletry stall we went to at the market had everything you could possibly want –  except a venus blade!  Things reached an all time low when I eventually found myself imitating the act of shaving one’s leg to a Cambodian lady in the middle of the market on the main road, she laughed hysterically and even called her friend over to come watch my charade, but still didn’t understand what we were after.  We gave up eventually and went to buy some snacks for our next journey instead.  Luckily, the store we were in happened to sell men’s razors, so we bought one each with big sighs of relief.

The next morning we were leaving Cambodia for good.  Our time here had been full of fun, education and excitement and we were genuinely sad to be leaving.  We had one mammoth journey ahead of us now – eight o’clock pick up, transfer onto a coach, entry into Laos, transfer onto another coach, then an overnight sleeper bus to Vientianne.  We would have one night in Vientianne after which we’d have an eventful journey up to Luang Prabang.  At this point everything looked good – the guy who booked our ticket for us at the hotel proudly told us how we would be using the country’s new road to journey through north, and the guidebook mentioned this road too saying how it provided ‘a very smooth ride’.  Yeah, once on said road it became clear that whoever wrote that sentence in the guidebook was being incredibly smug and sarcastic …