I love social media.  There, I said it.  I love social media.  When I hear people groan at the word twitter or ask ‘What exactly is Pinterest for? It’s just pictures isn’t it?’ a part of me winces, the other bites my tongue.  When social media is used in the wrong way, it can be humiliating for those involved and embarrassing to witness.  For example, when the owners of Amy’s Baking Company appeared on Kitchen Nightmares, their Facebook page soon began receiving comment after comment from reddit users.  Anyone who knows anything about the internet in general, knows not to react to trolls.  They reacted – read here.  That is probably the only lesson anyone will ever need in how not to use social media.

But when it’s used in the right way, when each tweet, pin, like and all other manner of shares leads to a beautifully orchestrated masterclass in good PR, when companies and brands really hit the nail on the head, it’s brilliant.  There are three perfect examples of this, and they are three reasons to love social media.

The first is the Bodyform response video, it’s an oldie but a goodie.  A guy posted a sarcastic and tongue in cheek comment on the brand’s Facebook page, accusing their advertisement campaigns of painting a false image around that time of the month – read here.  Bodyform responded quickly and brilliantly with this video:

The second is even more brilliant.  I saw this on Twitter about a year ago and it took me about three days to get over it.  An image was shared on Imgur, a site which pretty much showcases the internet’s most viral images and memes of the moment.  The image contained a thread on a Facebook page, a Facebook message and a photo of two guys at the Eiffel Tower at the bottom.
The Facebook thread was extracted from the Thomas Cook Facebook page, where a guy called Thomas Cook had written to the holiday provider.  In a nutshell he asked them for a free holiday to Paris for providing them with free advertising through his name.  Thomas Cook responded, not offering him a free holiday and providing him with a link to their website.  While it’s great they responded to him, they missed a golden chance to win big internet points.  Now that they hadn’t given him a free weekend in Paris the gates were open for their competitors to step in and do so instead, which they did.
The next Facebook extract was a message from Low Cost Holidays to Mr Thomas Cook, telling him they would like to give him a free holiday to Paris for him and a friend since he had just been ‘Thomas Crooked’.  The photo at the bottom was of him and his friend on said free holiday.  Massive publicity win for Low Cost Holidays, and massive publicity fail for Thomas Cook.  Snooze you lose. 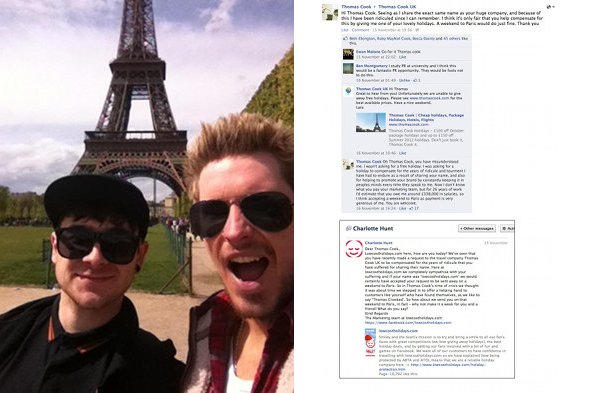 {source}
The Imgur link was shared throughout Facebook and Twitter etc (I can remember retweeting it from someone myself) and the entire internet.  Social media PR done exactly right!  See it on Imgur here.
The third and final example is the best by far and has nothing to do with PR, just the power the internet has to reach people.  You might have already seen this picture of this Sikh lady, named Balpreet Kaur: 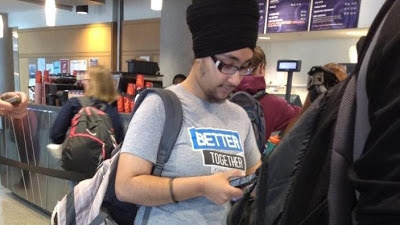 {source}
This image found its way to Reddit, where users began shaming the woman because of her appearance.  One user in particular shared the image with the caption ‘i’m not sure what to conclude from this’.  As things escalated and the insults mounted, Ms Kaur caught wind of the Reddit ripple on Facebook and sent a personal response to the guy who originally posted the photo.  My favourite part is this:
“My attitude and thoughts and actions have more value in them than my body because I recognize that this body is just going to become ash in the end, so why fuss about it? When I die, no one is going to remember what I looked like, heck, my kids will forget my voice, and slowly, all physical memory will fade away. However, my impact and legacy will remain: and, by not focusing on the physical beauty, I have time to cultivate those inner virtues and hopefully, focus my life on creating change and progress for this world in any way I can.”
Her response was heartfelt, kind and so incredibly good willed –  read it in full here.  After this really beautiful response, the guy who originally posted the photo on Reddit sent out an apology to Ms Kaur and to the Sikh community:
“I know that this post ISN’T a funny post but I felt the need to apologize to the Sikhs, Balpreet, and anyone else I offended when I posted that picture. Put simply it was stupid. Making fun of people is funny to some but incredibly degrading to the people you’re making fun of. It was an incredibly rude, judgmental, and ignorant thing to post.
/r/Funny wasn’t the proper place to post this. Maybe /r/racism or /r/douchebagsofreddit or /r/intolerance would have been more appropriate. Reddit shouldn’t be about putting people down, but a group of people sending cool, interesting, or funny things. Reddit’s been in the news alot lately about a lot of cool things we’ve done, like a freaking AMA by the president. I’m sorry for being the part of reddit that is intolerant and douchebaggy. This isn’t 4chan, or 9gag, or some other stupid website where people post things like I did. It’s fucking reddit. Where some pretty amazing stuff has happened.
I’ve read more about the Sikh faith and it was actually really interesting. It makes a whole lot of sense to work on having a legacy and not worrying about what you look like. I made that post for stupid internet points and I was ignorant.
So reddit I’m sorry for being an asshole and for giving you negative publicity.
Balpreet, I’m sorry for being a closed minded individual. You are a much better person than I am
Sikhs, I’m sorry for insulting your culture and way of life.
Balpreet’s faith in what she believes is astounding.”
I’m pretty sure that at this point the Internet itself sat back in its chair and sighed ‘My work here is done’.  So there you have it, three perfectly good reasons to love social media.